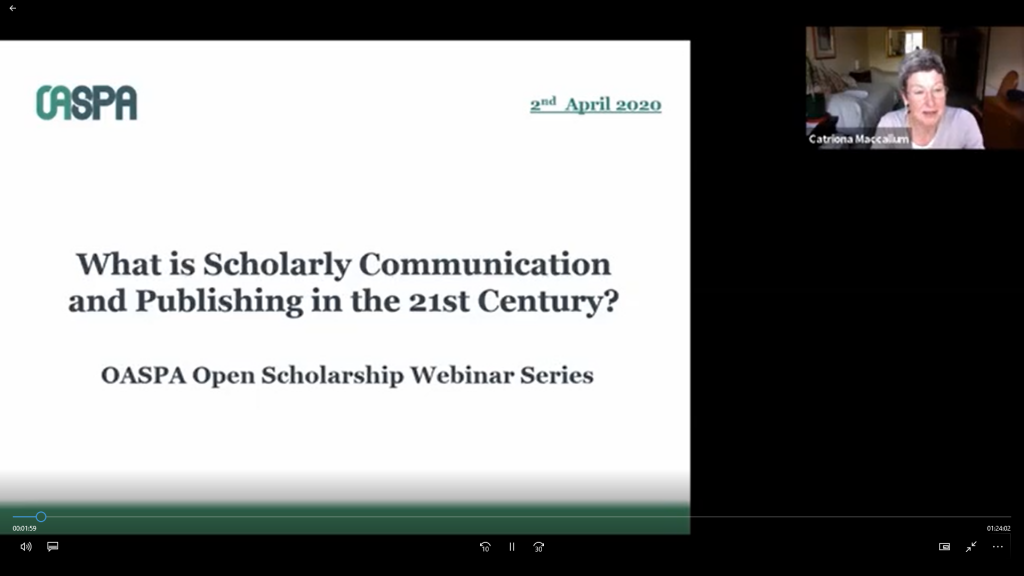 As well as the recording above, please see this post for webinar speakers’ key takeaways and answers to attendee questions. Slides can be found here.

What is scholarly communication and publishing in the 21st Century?

The 21st Century has seen fundamental changes to the way we share, access, disseminate and discover knowledge. The extent to which researchers and are now making data and articles about COVID-19 openly available, for example, is testament to the impact of the change and the widespread understanding of the benefits of openness and collaboration to accelerate research. This is beginning to reap real benefits for science and society. So what is scholarly communication and publishing in the 21st Century and what should our priorities for, and values of, scholarship be now compared with those in the 20th Century?

Governments around the world are taking an increasing interest in open access and open science because they see direct benefits for society. In the US, open access is now actively under consideration by the White House. We are delighted, therefore, to have secured three US-based experts for OASPA’s first webinar of 2020 – Heather Joseph (Executive Director of SPARC), Kathleen Fitzpatrick (Director of Digital Humanities and Professor of English at Michigan State University) and John Wilbanks (Chief Commons Officer at Sage Bionetworks) – to explore publishing’s role in service to 21st century scholarship. Our three speakers will each provide their own perspective and then we will open up the webinar to questions from the audience. The webinar is free to anyone who registers. Come join us!

Link to the registration page: https://copyright.zoom.us/webinar/register/WN_rXCGGBD5S8aXeMNPJ89m-A

The panelists will each speak for 15 minutes, followed by a short group panel discussion and we will then open it up to questions from the audience.

Kathleen Fitzpatrick is Director of Digital Humanities and Professor of English at Michigan State University. Prior to assuming this role in 2017, she served as Associate Executive Director and Director of Scholarly Communication of the Modern Language Association. She is author of Planned Obsolescence:  Publishing, Technology, and the Future of the Academy (NYU Press, 2011) and The Anxiety of Obsolescence: The American Novel in the Age of Television (Vanderbilt University Press, 2006). She is director of MESH, a research and development unit at MSU focused on the future of scholarly communication, and project director of Humanities Commons, an open-access, open-source network serving nearly 20,000 scholars and practitioners in the humanities. She serves on the editorial or advisory boards of numerous publications and projects including the Open Library of the Humanities, Luminos, the Open Annotation Collaboration, and thresholds. She is a member of the board of directors of the Council on Library and Information Resources and of the Educopia Institute, and is Vice-President/President-Elect of the Association for Computers and the Humanities. Her most recent book, about the role of institutions is entitled ‘Generous Thinking: A Radical Approach to Saving the University’, and is available from John Hopkins Press.

Heather Joseph is the Executive Director of the Scholarly Publishing and Academic Resources Coalition (SPARC) . Based in Washington, D.C., she leads the organization’s efforts to advocate for open sharing of research outputs including digital articles, data and educational resources. Heather spent 15 years as a publishing executive at commercial and not-for-profit organizations. At SPARC, she works with the organization’s member libraries to advance the open agenda on college and university campuses. Under her leadership, the organization launched the Right to Research Coalition.  Heather has led the Alliance for Taxpayer Access and the Open Access Working Group, helping to successfully pass open access policies including the landmark National Institutes of Health public access policy. Heather is recognized internationally as an expert, speaker and writer on opening up access to knowledge and developing new models for scholarly communication to accelerate the advancement of science. This past month, SPARC launched ‘The Big Deal Knowledge Database’, which enables Individual institutions to compare pricing data to understand best practices in the field, make clearer assessments about the suitability of Big Deals, and better inform negotiations.

John Wilbanks is the Chief Commons Officer at Sage Bionetworks. Previously, Wilbanks worked as a legislative aide to Congressman Fortney “Pete” Stark, served as the first assistant director at Harvard’s Berkman Center for Internet & Society, founded and led to acquisition the bioinformatics company Incellico, Inc., and was executive director of the Science Commons project at Creative Commons. In February 2013, in response to a We the People petition that was spearheaded by Wilbanks and signed by 65,000 people, the U.S. government announced a plan to open up taxpayer-funded research data and make it available for free. Wilbanks holds a B.A. in philosophy from Tulane University and also studied modern letters at the Sorbonne. He has most recently written about the role of citizen scientists in health and biomedical research.

Catriona MacCallum (@catmacOA) is Director of Open Science at Hindawi. She has 20 years experience in scholarly publishing and 15 years in Open Access Publishing. She has a PhD from Edinburgh University and went into publishing as a professional Editor initially working for Elsevier, where she was Editor of Trends in Ecology & Evolution, before joining the Open-Access publisher PLOS in 2003 to launch PLOS Biology as one of the Senior Editors. She also acted as a Consulting Editor on PLOS ONE, leaving PLOS as Advocacy Director in 2017. She is currently a member of the European Commission’s Open Science Policy Platform and the UKRI Open Access Practitioners Group. She serves on the Advisory Board of the Royal Society (Publishing), and is on the steering committee of the relaunched DORA initiative. She is a founding individual of the I4OC (Initiative for Open Citations) campaign.

Claire Redhead (@OASPA) is Executive Director of OASPA. Her publishing background began back in 2000. Editorial positions in UK publishing houses in the 12 years that followed provided her with valuable opportunities for developing key skills and varied experience in the academic journal and book publishing industry.  In 2012 Claire joined the Open Access Scholarly Publishers Association (OASPA), initially responsible for managing membership and communications for the organisation. Claire quickly took the lead to develop and grow OASPA during this time, and was appointed Executive Director of the association in 2016.

Note that previous OASPA webinar details and recordings can be found here.