OASPA Board Members are appointed via an annual election process and serve for a term of three years, playing a vital role in OASPA’s work to support and represent the interests of Open Access journal and book publishers globally. In the sixth of a series of posts highlighting the important contributions of the Board, OASPA’s Events and Communications Coordinator, Leyla Williams, talked to Rhodri Jackson, Editorial Director at Oxford University Press and outgoing OASPA Board member. 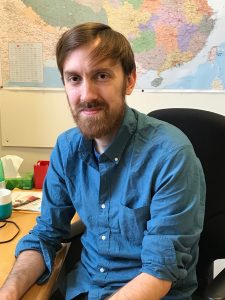 Thanks for talking to me today, Rhodri. How long did you serve on the OASPA Board, and why did you join?

I served on the OASPA Board for six years until very recently. The reason I initially joined the Board in 2012 was the same reason Oxford University Press itself joined OASPA; I attended the first COASP meeting, where I met OASPA founders Caroline Sutton, Paul Peters, Mark Patterson, David Ross, and Lars Bjørnshauge, and subsequently spent lots of time talking with and getting advice from them about open access publishing. When the chance came to join the Board, I took it.

What has changed about OASPA and open access publishing since you joined the Board in 2012?

In both cases, it’s been a story of growth. At that time OASPA had been going for three or four years, but wasn’t especially organised; it had grown organically thanks to the passion of those involved in setting it up. In the past six years, OASPA has grown and changed enormously both in terms of membership and in how we have professionalised. OASPA now has two members of staff, and has really developed from the time when we relied on the Board to do most of the work (in addition to their day jobs). As the outgoing Treasurer, I have worked closely with Paul Peters, OASPA’s current president, to make OASPA financially sound and put the association in a good place to actively represent OASPA’s membership.

As for open access publishing itself and how it has changed – 2012 was a key moment. Funders like RCUK and the Wellcome Trust updated their publishing policies to advocate much more heavily for open access; the Finch Review came out; and there was a huge expansion in hybrid publishing and parallel growth in investment in open access.

You’ve been working at Oxford University Press since 2006. What has been your experience working in publishing and open access there?

I’ve been working in open access at OUP since I first started working at the organisation, and at that time it was really just a couple of us doing so. Early on, I worked on Nucleic Acids Research, which we flipped from a subscription to an open access journal. Now, we have six people at OUP who work purely on open access, and hybrid publishing is a standard part of our offering, so things have changed dramatically in the intervening years.

At OUP, I’m proud to have helped get us to a place where we now carry more than fifty open access journals. While almost all of these are in STEM fields, I have brought two open access law journals to OUP: the Journal of Legal Analysis and the Journal of Law and the Biosciences. I’ve also been lucky to work closely with Eelco Ferwerda and Jisc on OAPEN, which was a landmark effort in open access book publishing, and was involved in ensuring that there is now a whole infrastructure in place for open access books at OUP[JR1] .

More recently, I’ve been working on our China-based journal list, where we now publish 15 journals, most of which are fully OA.

And what have been the challenges you’ve experienced to progress the open access movement?

The first most obvious challenge has been the sustainability of different open access approaches, and managing multiple business models at once. There’s a pressing need to retain the quality of journals even as they flip from subscription models, and publishers need steady incomes to retain that quality.

We also face differing challenges and perspectives across disciplinary lines. At OUP, we publish across a wide range of subjects in the humanities and social sciences as well as the sciences, in which there are many different takes on open access.

The biggest challenges often come when mandates for open access are launched. As a large international publisher, such mandates – like those in the USA which mostly centre on green open access, in contrast to the mostly gold open access mandates in Europe – can be hard to communicate to those operating in publishing landscapes in other parts of the world.

These are all significant challenges, but given that OUP and others are producing more open access content than ever, I would argue we are working through them quite successfully. We shouldn’t be too impatient about the pace of change in publishing.

What kind of initiatives are you working on at OUP the moment?

This year we’ve been working with Jisc on our combined open access/subscription deal, and talking with other library consortia about collaborating on new deals with them too.

We’ve been taking a systematic approach to open access at OUP, looking closely at the best open access models and methods for each journal we publish. We’re really picking up the pace of working on open access in general at OUP.

I’ve also, of course, been working on how Plan S will affect us and the open access landscape at OUP.

As ever, it’s all about breaking down barriers to access. OUP is mission-based; we are a department of the University of Oxford and we don’t have shareholders. We strive to make research as accessible as we possibly can, and this includes our commitment to publishing our broad range of humanities and social science research.

It’s been interesting to work with the Max Planck Digital Library this year. Their OA2020 initiative has been very influential, and they have done tireless work in moving towards an open access world.

We miss you on the Board already. What do you see in the near future for OASPA?

My job as Treasurer at OASPA was to get us to a place where we felt safe financially. I think we’re there now. Going forward, I’m looking forward to hearing OASPA’s voice be stronger and more prominent in the industry.