Each year, OASPA surveys its members about their publication output – both books and journals. We are delighted to once again have worked with Delta Think who have helped us by taking on the analysis, structuring and presentation of the data we collected, and in this guest blog post they highlight our books findings.

To complement its annual survey of members’ journals, OASPA also gathers information about member books output. Information covers the number of open access book titles and the license under which they were published. See the downloadable spreadsheet for full details.

This year, Delta Think is delighted to have worked with OASPA to help structure and present the data. We also took in data from OAPEN and the Directory of Open Access Books (DOAB) to help set the OASPA members’ data in context. This guest blog post covers some highlights from our findings.

The number of OA books published by OASPA continues to grow, as shown in the figure 1, below.

Shifting Patterns in License Use

Figure 2, below, analyses the cumulative effects of the year-by-year figures above. It shows the pattern for all books up until each year in question. (So, e.g., the 2020 column includes the data for 2020 and all previous years. The 2019 column covers 2019 and all years before then, and so on.).

In earlier years, CC BY-ND was by far the most common license used, accounting for 75% or more of licenses used. This proportion dropped through the noughties, as CC BY-NC-ND and CC BY-SA took over. BY-NC-ND has continued to grow in share. In 2013, CC BY and CC BY-NC started to increase share too, although the use of CC BY-NC peaked in 2017 and it has since lost share. Now, CC BY accounts for 48% of books published across all years, and CC BY-NC-ND for 30%. Because of the rapid growth in the number of titles published, patterns in recent years have large effects on the patterns overall.

By combining the OASPA survey data with metadata from the DOAB, we can put the OASPA data into the context of the wider market.

The left-hand side of figure 3, above, shows that OASPA members produce roughly 15% of the number of books as are indexed in the DOAB. Note, we do not analyze title-by-title data, so we cannot measure what overlap there is between the DOAB and OASPA members’ titles.

The right-hand side of figure 3 compares use of licenses. Compared with the DOAB, OASPA members make greater use of CC BY licenses for their books proportionally, and of Creative Commons licenses generally overall. The difference is mainly because of a greater proportion of unspecified license types in the DOAB. OASPA Members make far greater use of CC BY license in their journal articles – around 88% CC BY in journals, compared with 48% CC BY in their books. 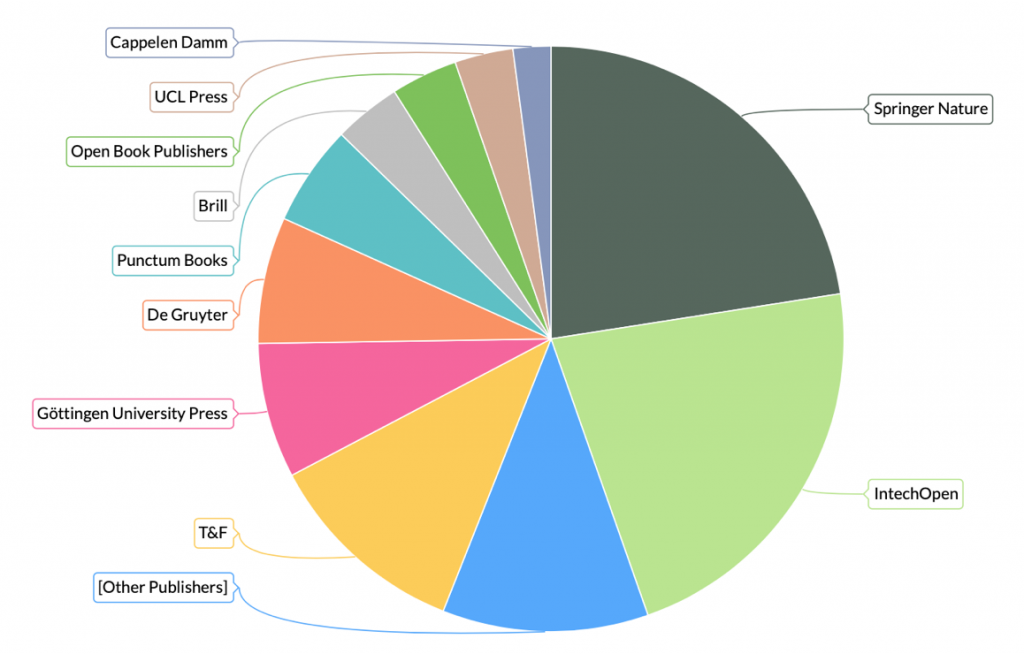 Delta Think is a strategic consulting and advisory firm serving organizations in professional and academic communications as well as professional membership societies. Since 2005, Delta Think has engaged with more than 120 organizations across the scholarly enterprise by creating effective business and product strategies, developing and analyzing customer and market intelligence, and translating strategies into actionable and execution focused roadmaps and work plans.