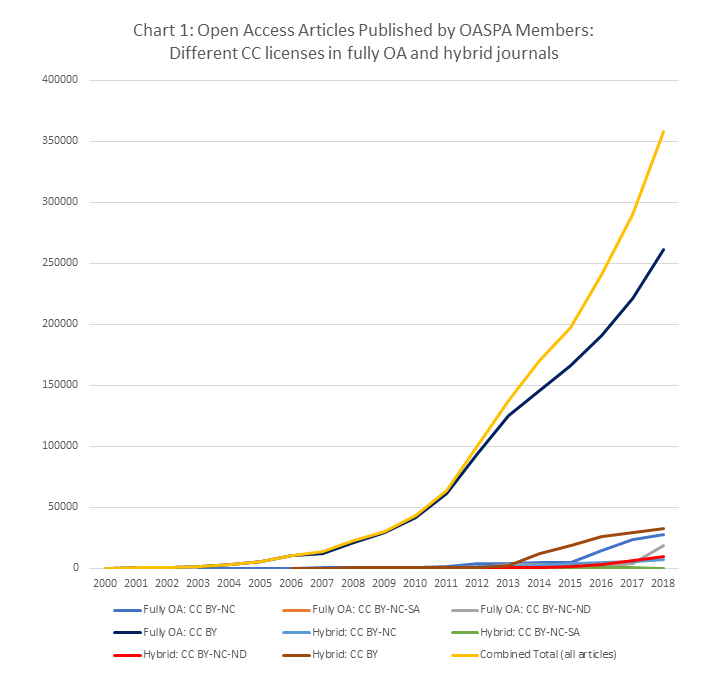 Data for the above chart can be downloaded here: OASPA Members CC-BY Growth_Data to 2018_CC0

OASPA members were invited to share their data to update the previous post on this topic which was published on the OASPA blog in June 2018. Figures were supplied as number of articles published per year since implementation of the license by that publisher. See the downloadable spreadsheet for full details (link above).

We have included information again which has been collected from our members on the number of open access articles across all journals (including hybrid) and the license under which those articles were published.  Chart 1 above clearly demonstrates that CC BY articles in fully-OA journals are by far the dominant type of articles published by OASPA members, however we continue to see an increase in OA articles in hybrid journals, as well as in fully-OA journals using some licenses other than CC BY.

Chart 2 below illustrates the data collected for open access articles published in all journal types, but excludes CC BY articles in fully-OA journals. All licenses are showing an increase, except for use of the Share-Alike license (CC BY-NC-SA) which is decreasing in both fully-OA and hybrid journals.  Note that our data shows a sharp increase in articles published as CC BY-NC-ND in open access journals and this is attributed to inclusion of data from De Gruyter for the first time, however those journals are now publishing articles as CC BY since the start of 2019 so figures will reflect this when collected next year and we expect to see a marked decrease in CC BY-NC-ND at that time.

Overall, the total open access output of OASPA members in 2018 has increased by 23% compared to 2017. 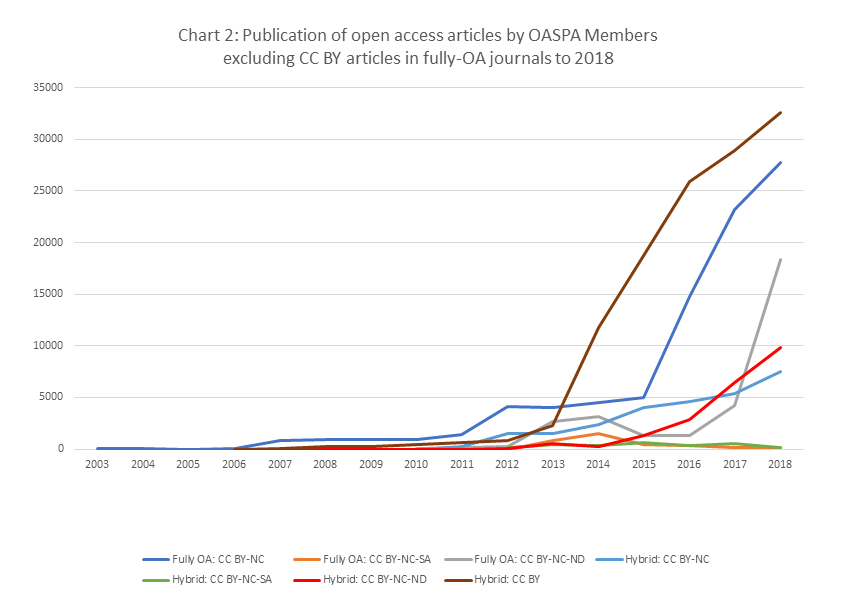 As has been the case since we started collecting this data from OASPA members, the figures for 2018 show that the year-on-year growth continues steadily for CC BY content in fully-OA peer-reviewed journals. With the percentage increase for CC BY articles from 2017 to 2018 calculated at 18%, the rate of growth is actually slightly higher than the average of the past 5 years.

As in 2017, 5 publishers account for 80% of the CC BY articles published in fully-OA journals by OASPA members . While the publishers are the same, the order has changed slightly from the previous year.  For 2018 Springer Nature published 28% of the total OA articles, MDPI 25%, Frontiers 11%, PLOS 9% and Hindawi 8%.

We are also pleased to be able to include data in the spreadsheet on the growth of the Directory of Open Access Books (DOAB) which now includes almost 13,000 titles.  Over 9,000 books in the DOAB have been published with a Creative Commons license, equivalent to 70% of the total number of open access books included in the directory.